Remember Our Women in the Military This Weekend 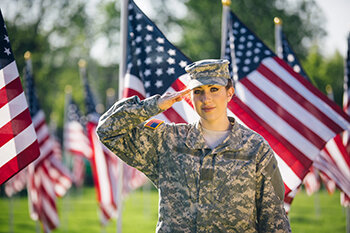 Remember Our Women in the Military This Weekend!

Memorial Day is on Monday, May 25, a day for you and your club to honor the men and women who died while serving in the United States Military. It was originally known as Decoration Day after the tradition of decorating soldiers’ graves with flowers. Women in Pennsylvania began this practice as early as 1864 following the end of the Civil War. Soon other states and cities did the same.

WaterlooCancel, New York, held an annual community-wide event beginning in 1866. This led the town to be recognized as the birthplace of Memorial Day by the federal government in 1966. Memorial Day became an official federal holiday in 1971. In 2000, Congress passed a resolution, urging Americans to set aside 3:00 p.m. on Memorial Day “to observe a national moment of remembrance to honor the men and women of the United States military who died in the pursuit of freedom and peace.”

Please pause one moment to remember the sacrifice of our valiant military service members. And, remember to submit any observances that your club may be planning while taking social distancing into account to pr@gfwc.org. Your success story could be one of the next features on GFWC’s Blog!